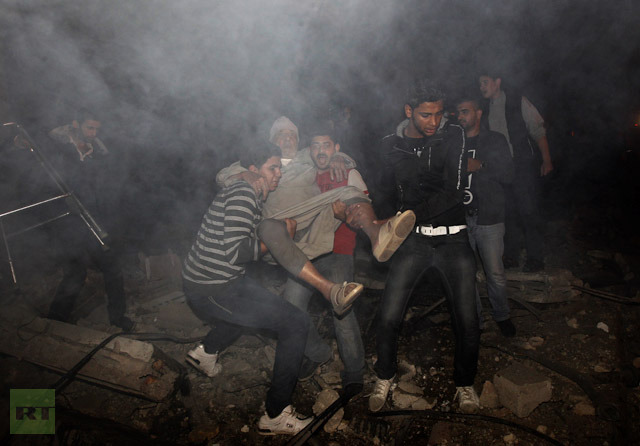 AFP – Egyptian Prime Minister Hisham Qandil will visit the Gaza Strip on Friday as Israel presses a major air campaign against the territory, the ruling Hamas government said on Thursday.

“The Egyptian leadership informed us that Prime Minister Hisham Qandil will visit Gaza tomorrow, accompanied by a number of ministers. We welcome this visit and appreciate this courageous stand,” Hamas spokesperson Taher al-Nunu told AFP.

The visit “confirms the support of the Egyptian leadership, government, and people for the Palestinian people in the shadow of the Israeli war against them in Gaza,” he added, saying Qandil would meet Hamas premier Ismail Haniya.

On Thursday, Morsy—who hails from the Muslim Brotherhood movement that gave birth to the Hamas movement—warned that Egypt would not accept Israel’s “aggression” in the Gaza Strip.

“The Israelis must understand that we do not accept this aggression, which could lead to instability in the region,” Morsy said in televised remarks, as Israeli air forces pummeled Gaza and militants fired rockets back in a deadly tit-for-tat confrontation.

“Shortly before dawn, I called President Obama and we discussed the need to put an end to this aggression and to ensure it does not happen again,” he said.

“We discussed ways to promote calm and to stop these acts… and to achieve peace and security.”

“I explained Egypt’s role, Egypt’s position, that we have relations with the United States and the world, but at the same time we totally reject this aggression.”

On Wednesday, Morsy also ordered the foreign ministry to summon the Israeli envoy over the attacks, and called for an emergency meeting of Arab League foreign ministers, which is slated to be held in Cairo on Saturday.