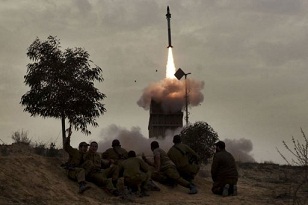 Jerusalem (AFP) – Israeli Defence Minister Ehud Barak has warned that a flare-up in violence with Gaza was “not over,” after new rocket fire on Tuesday morning and Israeli strikes overnight.

The violence that began on Saturday appeared to have slowed considerably, with Gaza militants firing a single rocket into Israel on Tuesday morning, hours after they said they would commit to a ceasefire if the Israel did the same.

Israeli war planes carried out air strikes against several targets overnight, which caused no injuries, although medics in Gaza said on Tuesday a seventh person had died in the violence, succumbing to wounds he sustained on Saturday.

Barak, after meeting Israeli military chiefs on Tuesday morning, warned that the current round of confrontations was ongoing, adding that Israel would decide how and when to respond to the rocket fire.

“It is certainly not over and we will decide how and when to act if necessary,” he said in remarks communicated by his office.

“We intend to reinforce the deterrence – and strengthen it – so that we are able to operate along the length of the border fence in a way that will ensure the security of all our soldiers who are serving around the Gaza Strip,” he said.

“At this time… it is preferable to act rather than just talk.”

And on Tuesday morning, the army said militants fired a rocket into Israel, causing no injuries, with local media reporting it was a longer-range Grad rocket, which landed near the coastal town of Ashdod.

In Gaza, medics said 20-year-old Mohammed Ziad, a member of Hamas’s armed wing, the Ezzedine al-Qassam Brigades, died Tuesday of wounds he sustained on Saturday, after the flare-up began when militants fired at an Israeli army jeep.

That attack injured four soldiers and prompted a quick escalation in violence, with Israel carrying out air strikes and shelling that killed six Palestinians and injured more than 30.

Gaza militants fired 123 rockets into southern Israel, lightly injuring four people. The military said 19 rockets were fired on Monday, four of which were intercepted by the Iron Dome system.

Despite Barak’s comments, and a series of bellicose statements from Israeli politicians on Monday, other officials sounded a more cautious tone on Tuesday.

“The army has at its disposal a series of measures that it has not yet used, it can raise the level of its response without resorting to a ground operation.”

Egyptian-led efforts are still under way to secure a ceasefire, with Gaza’s main militant groups, led by Hamas and Islamic Jihad, on Monday saying they were ready for a ceasefire if Israel “stops its aggression” against the territory.

“The response of the resistance depends on whether the Zionist aggression against our people is continued,” they said at a Gaza City news conference.