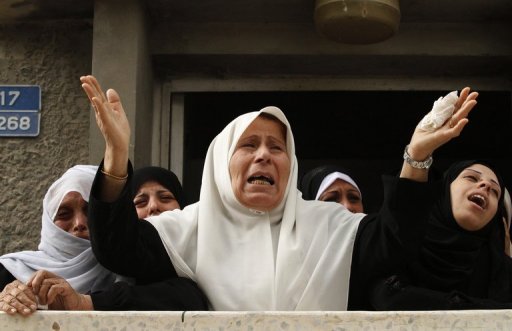 Jerusalem (AFP) – Israel is “prepared to escalate” its response to a flare-up of violence along its border with the Gaza Strip, Israeli Prime Minister Benjamin Netanyahu warned on Sunday.

“The world must realise that Israel won’t sit by idly in the face of attempts to attack us. We are prepared to escalate our actions,” he said at the start of his weekly cabinet meeting.

His comments came after more than 12 hours of violence along Israel’s border with Gaza, sparked when militants Saturday evening fired an anti-tank missile at an Israeli jeep east of Gaza City, injuring four soldiers, one of them severely.

The army said at least 36 rockets fired from Gaza had landed in Israel during the flare-up, with a new barrage on Sunday morning injuring four people in the Israeli town of Sderot, several kilometres (miles) from the border.

The flare-up is one of the most serious since Israel’s devastating 22-day operation in the Gaza Strip over New Year 2009.

The attack on the Israeli jeep was claimed by the armed wing of the left-leaning Popular Front for the Liberation of Palestine.

The army said three of the wounded soldiers were in hospital on Sunday, one with severe injuries while two others were moderately injured. A fourth was lightly wounded in the attack.

The Israeli military said it had attacked seven different targets overnight, including arms dumps, a weapons-making facility and two rocket-launching sites “in response to recent events.”

“The army is acting and will act forcefully against the terror organisations in the Gaza Strip. They are receiving strong blows from the army,” Netanyahu said on Sunday morning.

It remained unclear whether Israel would launch a larger-scale operation against the Gaza Strip, as it did in December 2008, just six weeks shy of general elections.

The operation cost the lives of 1,400 Palestinians – half of them civilians – and 13 Israelis, 10 of them soldiers.