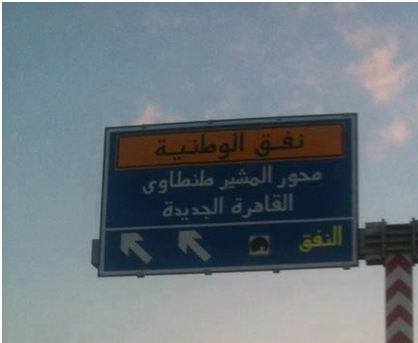 A traffic sign for part of the road that leads to the Fifth Settlement from Nasr City has been renamed Mehwar Al-Mosheer Tantawi (Field Marshal Tantawi axis), causing a storm among activists and social media users.

The entire highway is called Mehwar Al-Shaheed (martyr axis) and extends from the Nasr City conference centre and sporting club to Ain Sokhna.

In May, Field Marshal Mohamed Hussein Tantawi opened a new section of refurbished road, which has since been known as NA.

“This is a provocation and the idea is stupid,” said Wael Abbas, blogger and political activist.

“When I saw the photo on social networks I thought it was photoshopped, so I went to where the sign was and took a photo of it. There’s one every few metres,” Abbas said.

The armed forces issued a statement on Saturday denying the name Mehwar Al-Shaheed was changed; “Tantawi’s name was given to the NA road that was renovated by the army last year,” the statement read.

Army spokesperson Colonel Ahmed Ali released a statement saying that Mehwar Al-Shaheed was inaugurated in September 2004. It was named Al-Shaheed to honour all Egyptian martyrs. The NA axis was established in 2012 by order of Tantawi. The axis used the name NA as a temporary code name.

“The road was named after Tantawi in recognition of his distinctive history in times of war and peace and for his leading role in the adoption and protection of the 25 January Revolution,” Ali’s statement read.

Cairo governorate, Cairo traffic management and the Urban Communities Authority all denied responsibility for naming the road after the former supreme leader of the armed forces.

“I don’t care which part of the road they named after Tantawi. The fact that they did it amid talks of safe exit for military officials and calls for prosecuting Tantawi is enough,” Abbas said.

Activists and anti-SCAF (Supreme Council of Armed Forces) campaigners consider the move an insult to those who died during the 25 January Revolution. Abbas said that some of the new signs have been defaced by activists.

Television host Mahmoud Saad commented on the issue in his program on Al-Nahar channel, saying that naming streets after people should happen after their death, as a commemoration. Alternatively,  presidents name things after themselves like former President Hosni Mubarak and the First Lady Suzan Mubarak.

“Things are stable now, please don’t provoke the people, let everyone do his job,” Saad said.

Revolutionary groups, activists like Try Them, Askar Kazboon, Nawara Negm, novelist Alaa Al-Aswany and many others have been calling for the prosecution of Tantawi and other SCAF members. They hold SCAF resposible for violent crackdowns on protestors during the transitional period managed by the council.