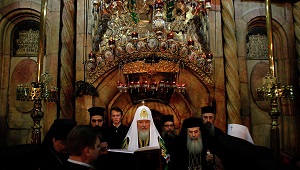 A statement released on the Muslim Brotherhood’s official English page on Saturday condemned the “Zionist occupation authorities’ intransigence towards the Church of the Holy Sepulchre in Jerusalem.” The statement was issued by Gamal Abdul-Salam, a Brotherhood leader and director of the Jerusalem Committee Union of the Federation of Arab Doctors.

The church in question is one of the most important sites for Christians as it is believed to be situated on Golgotha, the hill where Jesus was crucified, and the sepulchre itself is believed to be his tomb. The Israeli government has demanded the church pay outstanding power and water bills amounting to millions of dollars, a cost which places of worship are normally exempt from. The government has also issued a freeze on the Patriarch’s bank account until the debt is settled.

In response to this demand, the leaders of the Greek Orthodox in Jerusalem threatened to close the church to worshippers and tourists unless the government withdraws their demand.

Abdul-Salam said in the statement the costs “demanded of the Church by Israeli occupation authorities are highly exaggerated,” which he said “confirms that Israel is persisting in its occupation policy of persecution and provocation against Jerusalem’s Arabs and their Muslim and Christian holy sites.”

“We, therefore, call for a clear Arab discourse in support of Arab presence in Jerusalem, especially to face up to Judaisation schemes practiced by the occupation authorities.”

Neither the Brotherhood nor their political wing, the Freedom and Justice Party, were available for comment. Abdul-Salam confirmed his statement, but was unavailable for any comment.

Mina El-Kess, the political co-ordinator for the Maspero Youth Union, said he was not surprised the Brotherhood chose to be critical of Israel’s treatment of Christians and Muslims. “The Ikhwan is playing a game,” he said.

Attacking Israel for its treatment of religious minorities is part of their international politics, El-Kess added. “The Brotherhood doesn’t care about Copts or liberals in Egypt, but when they speak to foreign governments they call us their brothers.”

According to El-Kess, another such incident of a contradictory statement is the tweet sent to the American embassy during the anti-Islam film protest, where the Brotherhood expressed their relief none of the embassy staff were hurt and hoped to maintain good relations with the US, while their Arabic webpage praised the protesters and called for another protest.

While on the global stage the Brotherhood appears sympathetic to Copts, El-Kess added, “their leaders go to mosques and tell people that Copts have no rights, and somehow that a Muslim stands higher than a Copt.”

“They are of a radical ideology and will always speak of other people and groups, but never themselves,” he concluded.