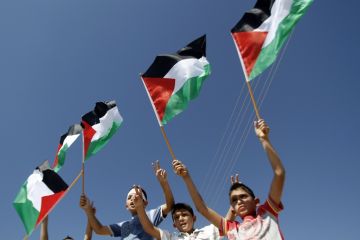 The comments came as Israel’s private Channel 10 reported that Foreign Minister Avigdor Lieberman last month pledged to ensure the “collapse” of the Palestinian Authority if the bid for non-member status at the General Assembly goes forward.

“The ambassadors will seek to define a diplomatic course with the Europeans intended to counter this initiative and to this end Lieberman will go to Vienna,” he added.

With direct peace talks on hold for more than two years, the Palestinians have sought to push for their long-promised state in other ways, seeking to upgrade their status from an observer entity to that of a non-member state.

Palestinian President Mahmud Abbas has said he will table the resolution later this month, on either November 15 or 29, according to officials.

Such a move is likely to be voted through easily, requiring only a simple majority in the 193-member General Assembly, where the Palestinians have widespread support.

But the move is fiercely opposed by Israel, and Channel 10 reported Monday night that Lieberman had warned during a meeting with EU foreign policy chief Catherine Ashton that the Jewish state would respond harshly to such a bid.

“If the Palestinians go to the UN General Assembly with a new unilateral initiative, they must know they will be subject to severe measures by Israel and the United States,” the station quoted Lieberman as saying on October 24.

“If the Palestinians pursue their project at the UN, they are definitively destroying the chances of peace talks,” Lieberman reportedly added.

“If they persist with this project, I will ensure that the Palestinian Authority collapses,” the station quoted him as saying.

Israeli daily Maariv on Tuesday said the government was considering measures including freezing the transfer to the Palestinian government of tax and tariff revenues collected on their behalf by the Jewish state.

The daily said other measures being weighed included reducing the number of Israeli work permits for Palestinians.