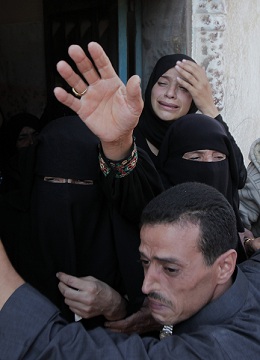 Police spokesman Micky Rosenfeld told AFP two rockets fell in open areas within the Eshkol district which flanks the southern sector of the Gaza border, while another two landed in and around Beersheva, a city of 194,000 people.

None of them caused any injuries or damage.

In Gaza, militants from the Popular Resistance Committees claimed responsibility for the two rockets fired at Beersheva.

“Many of the houses in our town are not protected (against rocket fire) and we cannot play with the lives of our children. I hope that lessons can resume soon,” he told Israeli public radio.

Hours earlier, an Israeli air strike killed a Hamas militant and wounded another after they fired mortar shells at Israeli tanks on an incursion near the southern city of Khan Yunis, Palestinian medics and witnesses said.

The dead man was named as Kamel Qarara, 25, a member of the Ezzedine Al-Qassam Brigades, the armed wing of Gaza’s ruling Islamist Hamas movement.

The wounded man was also said to be a Hamas militant.

The military confirmed the strike but refused to comment on the allegation Israeli armour had entered the Palestinian territory and come under fire from militants.

“Overnight, IAF (air force) aircraft targeted a rocket launching site and squad in the central Gaza Strip, during final preparations to fire a rocket towards southern Israel. Secondary explosions were identified and a hit was confirmed,” it said, implying ammunition or explosives were hit.

Militants had fired more than 150 rockets at Israel since the start of the month, it said.

The latest exchanges took place after a three-day lull in violence after an Egyptian brokered truce went into force at midnight on Wednesday.

The agreement was aimed at ending a 72-hour spike in cross-border fighting, which began on Monday, with Israeli strikes killing eight militants and armed groups firing more than 100 rockets across the border, seriously wounding two Thai workers.

Since then, just one rocket has hit Israel, falling on open ground and causing no casualties or damage, the military said.

During the morning, the Israeli cabinet is to discuss a programme to blastproof homes and public buildings which lie within 4.5-7 kilometres from the border with Gaza which are not covered by the Iron Dome anti-missile system.