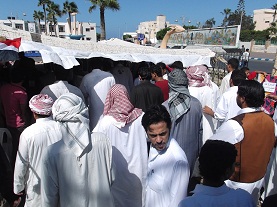 President Mohamed Morsy issued a decree on Monday appointing Major General Ahmed Helmy Fathi Al-Hatimi as the new governor of Matruh. Al Hatimi is replacing General Taha Mohamed Al-Sayed after a month long sit-in by various groups from the Matruh region calling for his resignation. One of the main demands of the protesters was for an end to military dominance of the governorate.

Spokesperson for the United Revolution Movement of Matruh (Takawa), Khaled Al-Seniny, said “President Morsy promised us that he would give us a new governor and he has and we are happy. However the new governor is another military man, we hope that he will be the last military governor in Matruh.”

Al-Hatimi was formerly the director of the school for reserve officers, which is located in Fayed in the Ismailia governorate. Dr. Ahmed Zakaria a member of the Matruh branch of the 6 April Movement said “we are hoping to arrange a meeting with the new governor to discuss the issues of Matruh.” Reports in the media have described scenes of jubilation in Matruh, Zakaria confirmed this but said “we are celebrating the departure of the old governor, not the arrival of the new one. We will have to wait and see what he is like; many people have said that he is a good man. If he disappoints us we will protest again.”

During his visit to Marsa Matruh last Friday, Morsy promised to address all the problems that the citizens of the governorate are facing and invited a delegation of 20-30 people to come to Cairo to discuss the issues. After Morsy’s visit, the sit-in officially ended.

The month long sit-in demanded that a variety of issues be addressed, such as clean water, unemployment and land ownership. They also called for the end to military dominance in the governorate. Al-Seniny pointed out “Matruh is an important military area and the army run the district, but we want civilian rule. We will ask Morsy to promise us that this will be the last military governor.”

Amongst the promises made by Morsy was the pledge to reimburse citizens of Dabaa for the land they claim has been stolen from them in order to build a nuclear energy plant, residents want to get rid of the power plant. According to Zakaria “the citizens of Dabaa have rejected this offer from President Morsy and they have begun a sit-in outside the nuclear power station.” Al-Seniny said “Takawa will join the people of Dabaa tomorrow (Wednesday). They are part of Takawa and they do not want the nuclear power station there.”

Zakaria also spoke about Morsy’s invitation for the people of Matruh to come to Cairo, he said “we have not chosen the people to go to Cairo yet, but we have prepared extensive files on each issue and we have also prepared out arguments to present to the president.” This meeting is due to take place on 6 November.