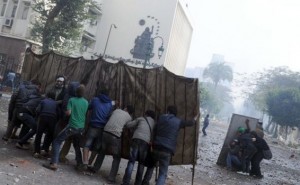 Seven people arrested for participating in the Cabinet clashes last December, were released by the Cairo Criminal Court on Saturday, although they still await trial.

The seven are the last of 262 defendants in the case released from prison and awaiting trial.

They were arrested during a sit-in which turned violent last December in front of the Cabinet.

According to one of the lawyers working on the case, Osama Al-Mahdy, the court did not pass a final verdict because President Mohamed Morsy has said he will begin pardoning civilians arrested between 25 January 2011 and his first day in office.

A final verdict is expected to be given by the court on 29 November, if there are still defendants who have not been pardoned.

Two of the defendants failed to appear in court and were thus released in absentia alongside the other five.

Al-Mahdy pointed out that a list of people eligible for pardon is being compiled by Prosecutor General Abdel Meguid Mahmoud and the military prosecutor, which has worried many activists and NGOs. “I hope this list includes all people who were in events related to the revolution but I am afraid for some people,” he said. “We cannot expect anything right now and we must wait and see who is or is not on the list.”

The demonstrators in the Cabinet clashes objected to the appointment of Kamal El-Ganzouri as prime minister at the time and were met with excessive force by the military police. Nineteen people lost their lives in the ensuing chaos surrounding the Cabinet and the Shura Council. The Scientific Institute located next to the Cabinet was burnt down and several public buildings were damaged.

If there are any people still undergoing trial after Morsy’s pardons, then Al-Mahdy and his companions “will have a second chance to secure their freedom in the court.”

“We will continue to work with the prisoners to secure their release,” Al-Mahdy said.

Two hundred and fifty of the defendants were released awaiting trial in January.

A further 12 were acquitted in July at the beginning of Ramadan.

Hend Nafea, one of those released in January, said one of the seven released on Saturday is Mohanad Samir, a secondary school student who had gone to a police station to give his statement over a murder he had witnessed. The authorities instead decided to arrest him.

Immediately following the fall of former President Hosni Mubarak, the military assumed temporary control over the country. One of the demands post-revolution has been for the release of civilians imprisoned for their involvement in protests during this period. Part of Morsy’s campaign pledge was to release all of such prisoners, but many people like Al-Mahdy are weary of the men drafting the list.

Nafea publicly refused any pardon that the president may give, because only a convict would need amnesty and “Morsy’s pardon would mean I am a criminal.” Nafea was beaten and locked up by her family after being released, and forbidden from leaving the house because of the case. “Right now the most important thing is to prove to my family and the world that I was innocent of those crimes,” Nafea said.