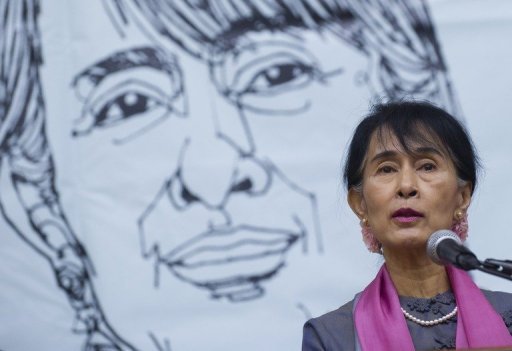 NEW YORK (AFP) — Myanmar democracy icon Aung San Suu Kyi has expressed hope that her country will complete its transition to democracy and become a nation of hope.

“I came today to thank you all and to ask all of you to stay with us until we have completed the journey to democracy, and we get to the point when we too can help others,” she said Saturday in a speech at Queens College in New York.

Her desire, she said, is that “Burma can once again become the country it was way back before the military regime took over, a country of hope.” Burma is the old name for Myanmar.

Speaking to heavy applause, the 67-year-old Nobel peace laureate spoke of change in her country, where a military regime was replaced last year by a civilian government.

Now a member of parliament, Suu Kyi is free to travel after spending 15 years under house arrest, and lives in a country with newfound freedom of the press.

“Two years ago, there were just two state papers. And now there are so many journals, new magazines, news journals,” she said.

Suu Kyi, who this week received the top honor the US Congress can bestow on someone — the Congressional Gold Medal — came to New York after visiting Washington as part of an 18-day tour of the United States, her first since being freed from house arrest two years ago.

On Friday, she visited the United Nations and received an award from the Atlantic Council think-tank, as she paid tribute to unknown fighters for democracy in her country.

The award was presented by Christine Lagarde, managing director of the International Monetary Fund, who said she was “intimidated” by Suu Kyi’s kindness and spirituality.

Myanmar was ruled by an iron-fisted junta for decades but, since taking office last year, a reformist government under former general Thein Sein has freed political prisoners and allowed Suu Kyi’s party into electoral politics.

Suu Kyi’s visit coincides with a three-day trip by Thein Sein to the UN, and there have been concerns that she will upstage his visit, despite his work pushing through reforms.

She endorsed the removal of sanctions imposed on Myanmar to punish the junta for its formerly oppressive rule in the Southeast Asian country.

The agenda of Suu Kyi’s unprecedented US tour includes nearly 100 events across the country. The Myanmar democracy leader will head on September 25 to Fort Wayne, Indiana, to meet the sizable Burmese community that has resettled in the Midwestern city.

Her other stops include Louisville, Kentucky as well as San Francisco and Los Angeles.