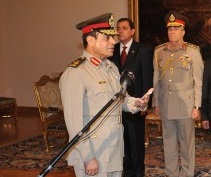 El-Roweiny’s resignation is redundant, however. The retired general was initially a member of SCAF by virtue of being Commander of the Central Military Zone.

He reached retirement age in July and thus would have lost his seat on the military council seeing as new commander, Major General Ahmed Wasfy, was appointed in his place, if it were not for the supplementary constitutional decree SCAF released in July.

The decree ruled that the composition of SCAF at the time would remain unchanged until a new constitution was passed.

Following President Morsy’s abrogation of the supplementary constitutional decree, however, SCAF went back to being a council composed of the holders of certain posts, rather than specific people. As such, following Morsy’s decision to abrogate the decree, El-Roweiny automatically lost his SCAF seat.

He tasked new Commander-in-Chief and Minister of Defence General Abdel-Fatah El-Sisi with restructuring SCAF and filling the rest of its vacancies, one of which is El-Sisi’s own former position as Director of the Military Intelligence and Scouting Agency.

El-Sisi has already appointed Staff Major General Osama Roshdi Askar as Commander of the Third Field Army after the post’s holder Lieutenant General Sedky Sobhy was made Chief of Staff of the Armed Forces, replacing Anan.

As Commander of the Central Military Zone El-Roweiny was responsible for the deployment of troops onto the streets of Cairo, including Tahrir Square, during the 25 January 2011 uprising that toppled former President Hosni Mubarak. He told protesters on 10 February 2011 that “all your demands would be met” and Mubarak indeed stepped down the next day.

He lost popularity with the revolutionaries following the series of clashes, some of which were deadly, between the military and protestors throughout 2011 and early this year. El-Roweiny repeatedly appeared in press conferences and talk show phone-ins denouncing anti-military protestors and accusing them of thugs.

He admitted on one occasion to having used “rumours to calm down the square” in January of last year when he gave protesters false news of the arrests of several of Mubarak’s top officials.