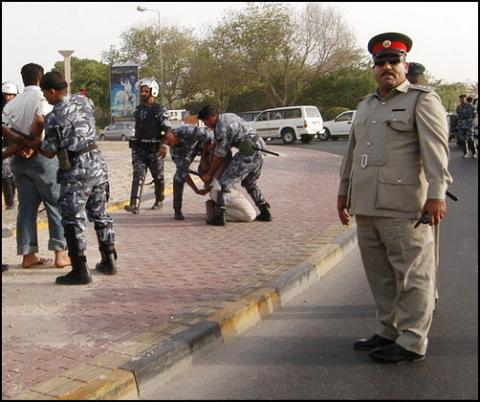 Nabeel Rajab, the Bahraini human rights defender already sentenced to three months in prison was sentenced to an additional three years on Thursday for three cases of taking part in unauthorised gatherings, according to the Bahraini Alwasat News.

The sentence has been condemned by several rights groups including the Cairo-based Arabic Network for Human Rights Information (ANHRI), Front Line Defenders, and the BCHR and the GCHR, both of which ran a statement on their websites strongly condemning the sentencing which they state was issued against Rajab because of his “legitimate and peaceful human rights work.”

The BCHR and the GCHR both called on the United States, the European Union, United Kingdom and human rights organisations to call for the release of Rajab and other human rights advocates Abdulhadi Alkhawaja and his daughter Zainab Alkhawaja and to increase pressure on the Bahraini government to halt human rights violations.

Rajab’s wife and two children, Sumaya Rajab, sent an open letter this week to the United Nations and international human rights organisations demanding Rajab’s release and an end to harassment of him and his family.

“I was accused of taking pictures of a checkpoint and I was beaten by traffic police and insulted after which I was taken to a police station where they interrogated me and released after they asked me to sign a pledge saying that I will go to the police station if they ask me to,” Almuhafda told the Daily News Egypt. Almuhafda had to sign the statement without his lawyer present.

Almuhafda said that what hurt him most was that it happened in front of his two daughters, aged three and five, who were crying at the time.

His arrest was condemned by the European Bahraini Organisation for Human Rights which called it an “arbitrary arrest.”

Almuhafda told the Daily News Egypt that he was expecting a different outcome in Rajab’s trial, “I expect him to be released especially after calls from tens of international organisations and the 19 US Congressmen, but anything might change.

“The continual arrests of activists and refusal to release them shows that the regime will continue its policy of targeting activists.”