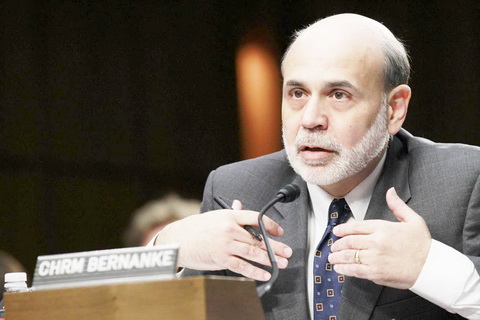 Washington (AFP) — Federal Reserve Chairman Ben Bernanke admitted Tuesday that US economic data had been “disappointing” and that a future reduction in unemployment would likely prove “frustratingly slow.”

Dealing a blow to Barack Obama and others hopeful for an improvement in economic news ahead of November’s presidential elections, Bernanke offered a gloomy assessment of the outlook for the world’s top economy.

In prepared testimony to Congress, the Fed chair forecast slower growth for this year and next, and a future replete with pitfalls both domestic and from Europe.

“Given that growth is projected to be not much above the rate needed to absorb new entrants into the labor force, the reduction in the unemployment rate seems likely to be frustratingly slow,” he said in his semi-annual testimony.

After growth rose a modest two percent in the first quarter of this year, Bernanke said “available indicators point to a still-smaller gain in the second quarter.”

He noted that members of the Fed’s top policy-setting panel had predicted that growth will reach 1.9 to 2.4 percent this year.

“These forecasts are lower than those we made in January, reflecting the generally disappointing tone of recent incoming data.”

With unemployment still stuck above eight percent, nearly four years after the worst of the financial crisis, investors will parse Bernanke’s words for signs of more stimulus to come.

Those looking for concrete steps will be disappointed, but Bernanke did signal his unease with the state of current affairs, leaving the prospect of more action firmly in play.

At its most recent meeting in June, the Federal Reserve’s policy committee agreed to extend a bond-buying program to boost the recovery, while several participants pressed for new tools to be weighed.

But with confidence in the recovery rapidly eroding, the Fed may now face a race against time.

“Households remain concerned about their employment and income prospects and their overall level of confidence remains relatively low,” Bernanke admitted.

That doubt is being felt in the housing market — a key pillar of the economy — which Bernanke said was modestly improving.

“We have seem modest signs of improvement,” he said.

“Both new and existing home sales have been gradually trending upward since last summer.”

But, he added, “would-be buyers are deterred by worries about their own finances.”

In terms of risk, Bernanke pointed to the double barrels of the eurozone crisis and US debt that are trained at the heart of the economy.

“The possibility that the situation in Europe will worsen further remains a significant risk to the outlook.”

But he added, European nations have both the incentive and the means to tackle the crisis.

He again urged Congress to put in place a plan that would reduce US debt while keeping short-term stimulus in place.