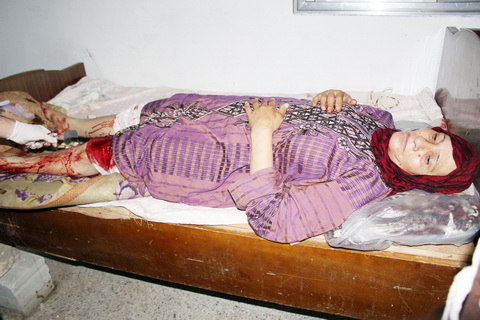 Syria marked a gruesome milestone on Friday by recording its highest numbers of fatalities in the conflict in a single day. An estimate 125 people were killed in shelling by government forces as well as attacks allegedlyperpetrated by Syrian opposition forces.

As the death toll of 16 months of conflict approaches 15,000 people, observers see no end in sight.

International and Syrian medical services are reporting difficulty in reaching some of the hardest hits areas in towns like Homs leaving many wounded people suffering and waiting for relief to come.

While shelling and fighting continues inside Syria, Syrian President Bashar Al-Assad is under pressure from the United Nations and NATO to negotiate an end to the long-standing 16-month conflict.

After little progress was made at the Geneva talks on Saturday, Russia offered to host another round of talks to address the situation in Syria A Russian Official told Interfax news agency, “Russia will propose holding such a meeting in Moscow” and possibly with additional relevant parties in attendance. “According to existing plans, Syria will be represented as well,” said the source.

The Geneva meeting was plagued by the absence of a concrete agenda and wrangling over whether Iran and Syria would be included.

Russia supported Iran’s participation as well as representatives from Syria, but the US balked at negotiating with Iran and, along with the UK, would not guarantee Al-Assad safe passage to attend.

Kofi Annan, the United Nations special envoy to Syria, despite having already failed to secure a ceasefire    with his current six-point plan, suggested a new and improved six-point plan.  The new roadmap being offered differs from the old one largely in that it offers a transition plan for the  government, which Russia does not support, and also makes room for harsher sanctions if Syria does not  comply.

Support for the plan still seems flimsy. Security Council members are torn over the meetings, and the UK  and US are at odds with Russia on several issues, most notably the participation of Iran, which even Annan  has suggested.

The United States was only two weeks ago in Moscow for a two-day summit hosted and brokered by Russia  with Iran. It aimed to make progress out the stalemate between Iran and the US over Iran’s nuclear programme, but gained no ground.

Meanwhile in Syria, Al-Assad has seen attacks from rebel forces hit closer to home. On Friday, rebels detonated two bombs in the parking garage of the Palace of Justice in Damascus, injuring dozens. Turkey is also pressuring Damascus, pushing NATO to intervene after a Turkish jet was shot down near the Syria- Turkey border. Recently, troops and a large contingent of arms were deployed to the border.