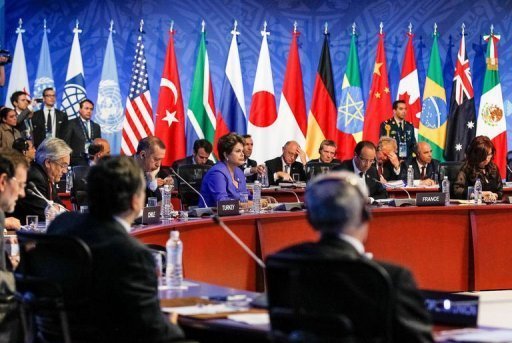 LOS CABOS, Mexico (AFP) – The leaders of the world’s major economies embarked on the final day of the G20 summit Tuesday determined to kickstart growth and pull the eurozone back from the brink of disaster. European members were under extraordinary pressure from their international counterparts to loosen the straitjacket of their austerity programs and to allow the European Central Bank to open the lending floodgates. Beyond the summit conference center in the Mexican resort of Los Cabos, bond markets jacked up rates on Spanish and Italian debt amid self-fulfilling fears that the debt crisis that sank Greece was spreading once again. Germany’s Angela Merkel remains the driving force behind the eurozone’s austere determination to privilege deficit busting over stimulus spending, although US officials say her position is softening. European members were under pressure from their international counterparts to loosen their austerity programs. “Discussion here has been balanced: we need the right mix of consolidation and growth stimulus at the same time,” Merkel told reporters on Tuesday, saying the previous night’s showpiece dinner had been a “very frank and honest exchange.” A draft version of the G20 final statement, which was to be finalised and published by the leaders on Tuesday, suggested that a formulation would be found that would commit the leaders to a pro-growth agenda. “All G20 members will take the necessary actions to strengthen global growth and restore confidence,” it said, vowing that eurozone members would safeguard the stability of the single currency in the face of volatile markets. The version seen by AFP allowed no hint that Merkel or her allies might crumble and allow the ECB to pump out cash or to pool German debt withthat of the weaker eurozone members in order to create low-interesteurobonds. But it opened up the possibility of more lending and spending if the European economy continues to struggle. “Should economic conditions deteriorate significantly further, those countries with sufficient fiscal space stand ready to coordinate and implement discretionary fiscal actions to support domestic demand,” the draft reads. There was also an indication that Merkel was coming round to the idea of a more integrated EU banking system that would allow joint supervision and a unified system to pay back depositors in any failing institutions. “We support the intention to consider concrete steps towards a more integrated financial architecture, encompassing banking supervision, resolution and recapitalization, and deposit insurance,” the draft statement said. “Markets expect that we work together more closely,” Merkel told reporters on Tuesday morning, without specifically mentioning unifying the banking system. EU Commission chairman Jose Manuel Barroso bristled at hostile questioning over why his rich continent needed so much support from abroad, declaring: “We are certainly not coming here to receive lessons from nobody.” Member states have promised a total of $456 billion (361 billion euros) for the IMF’s new crisis fund US President Barack Obama cancelled a planned meeting with European G20 members after the official dinner hosted by Mexico’s President Felipe Calderon ran long. “Everything that could have been said at the Obama meeting had been said at dinner, so we were done with the topic,” Merkel said. Obama called for Greece to be given more time to get its affairs in order, after parties committed to honoring the terms of its bailout agreement won a majority of seats in Sunday’s parliamentary election. But Merkel, fast becoming a hate figure among Greeks, remained unmoved. “Elections cannot call into question the commitments Greece made. We cannot compromise on the reform steps we agreed on,” she told reporters on Monday.